Having taken delivery of 13 Boeing 787-9s between October 2015 and August 2018, it was time for KLM to move on to the next best thing: the Boeing 787-10. The first touched down at Schiphol on 30 June – a sustainable and energy-efficient Dreamliner called ‘Orange Blossom’, decorated with the KLM100 logo specially designed in celebration of KLM’s 100th anniversary. The second one (the Busy Lizzie) has been part of our fleet since 17 October. In this blog, I’ll give you an account of the assembly of KLM’s latest addition to the fleet.

The Boeing 787-10 aircraft is an extended version of the 787-9. The extra six meters were gained by adding three meters to the rear and three meters to the front of the main fuselage, allowing the number of seats to be increased from 294 to 344. Fun fact: KLM is the first European airline to operate this new Boeing type.

Although the 787-9 and 787-10 are built in much the same way, the increased size means the fuselage cannot be shipped by air aboard the Boeing 747 DreamLifter, a wide-body freighter developed exclusively for transporting Boeing 787 parts. Consequently, the new 787-10 can only be assembled at the location where the fuselage is built, which is the Boeing plant in Charleston, South Carolina. 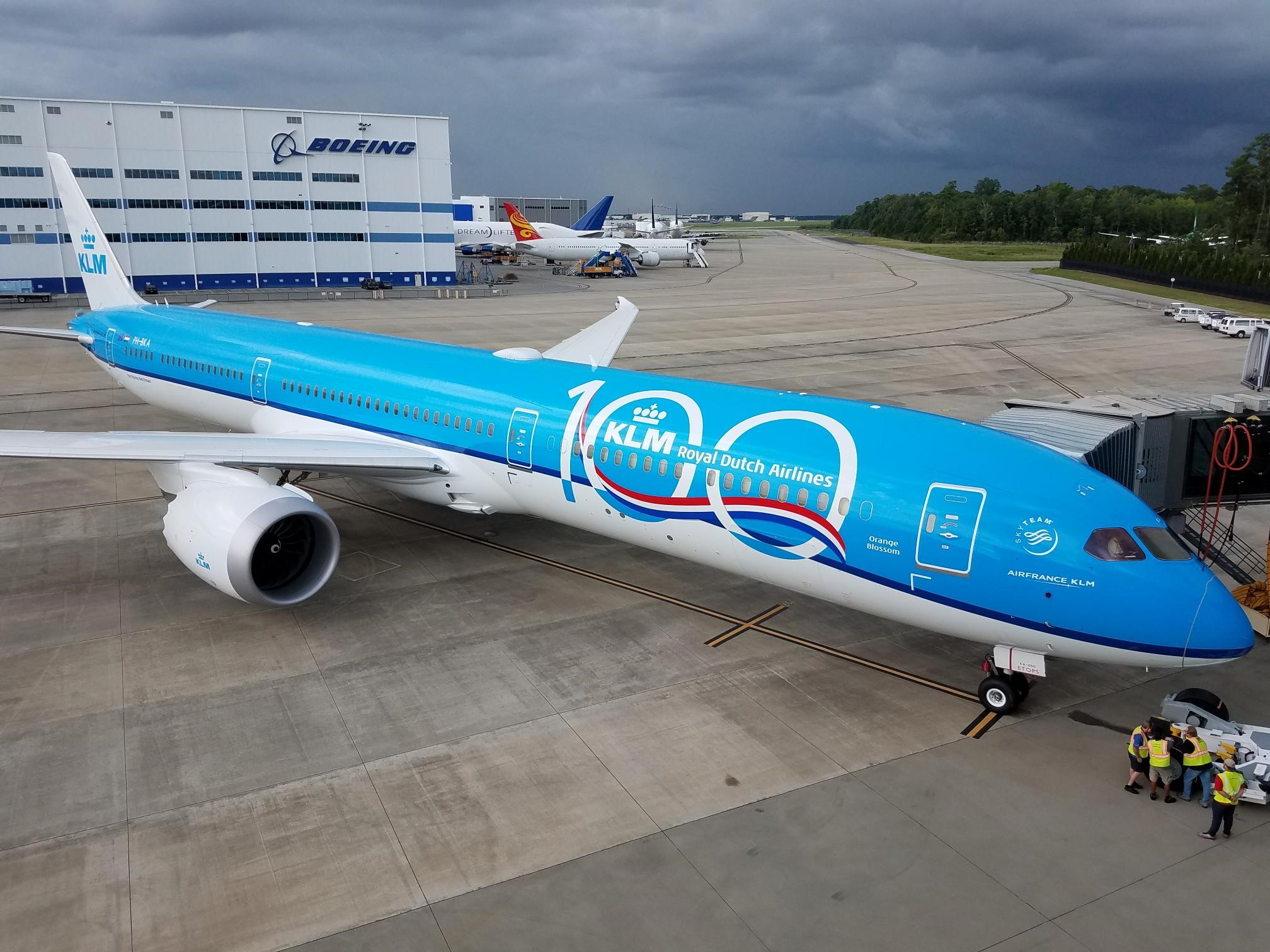 The Boeing 787 is an aircraft that has been designed to fly very long distances up to 15,400 kilometers with a big reduction in fuel usage. The aircraft type is approximately 20 procent more fuel-efficient, with approximately 40 percent of the efficiency gain from the engines, plus gains from aerodynamic improvements, increased use of lighter-weight composite materials and advanced systems.

What has changed in the past four years is the rate at which Boeing is able to build an aircraft. In 2015, it took the manufacturer 24 factory days to build an aircraft, but this has now been reduced to 15 factory days, employing what seems to be only half the manpower previously required. The efficiency gains are staggering, partly because the aircraft are built at four different “positions”. Here’s a quick overview:

This is where parts arrive and are prepared for installation. As was the case for previous Boeing 787s, parts are still flown in from around the world to be assembled. Boeing works with suppliers worldwide, which keeps the four DreamLifters very busy. The wings come from Japan, for instance, and are fitted with flight-control surfaces made in Australia. The vertical and horizontal stabilizers at the back of the aircraft are made in Korea, and they are mounted on the aft fuselage, which is made by Boeing itself. 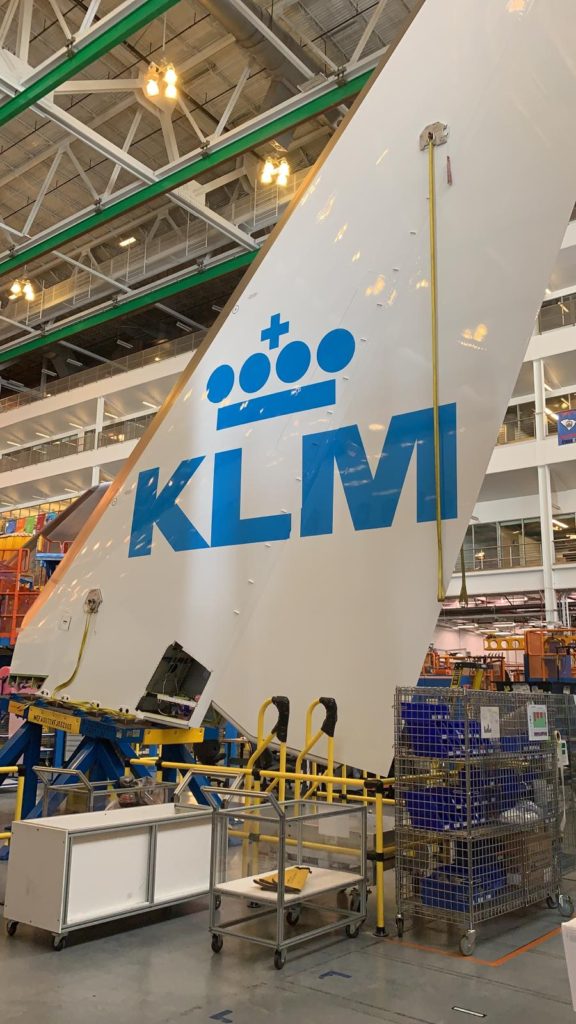 Aft and forward fuselage are joined to the mid-body fuselage. After which the wings are mounted and the landing gear is installed. All this takes just three days.

The sections of the fuselage are connected from the inside and systems such as wiring, air-conditioning ducts and floor structures are installed. The sidewalls and some of the galleys and toilets are installed. Electrical and hydraulic power are activated. 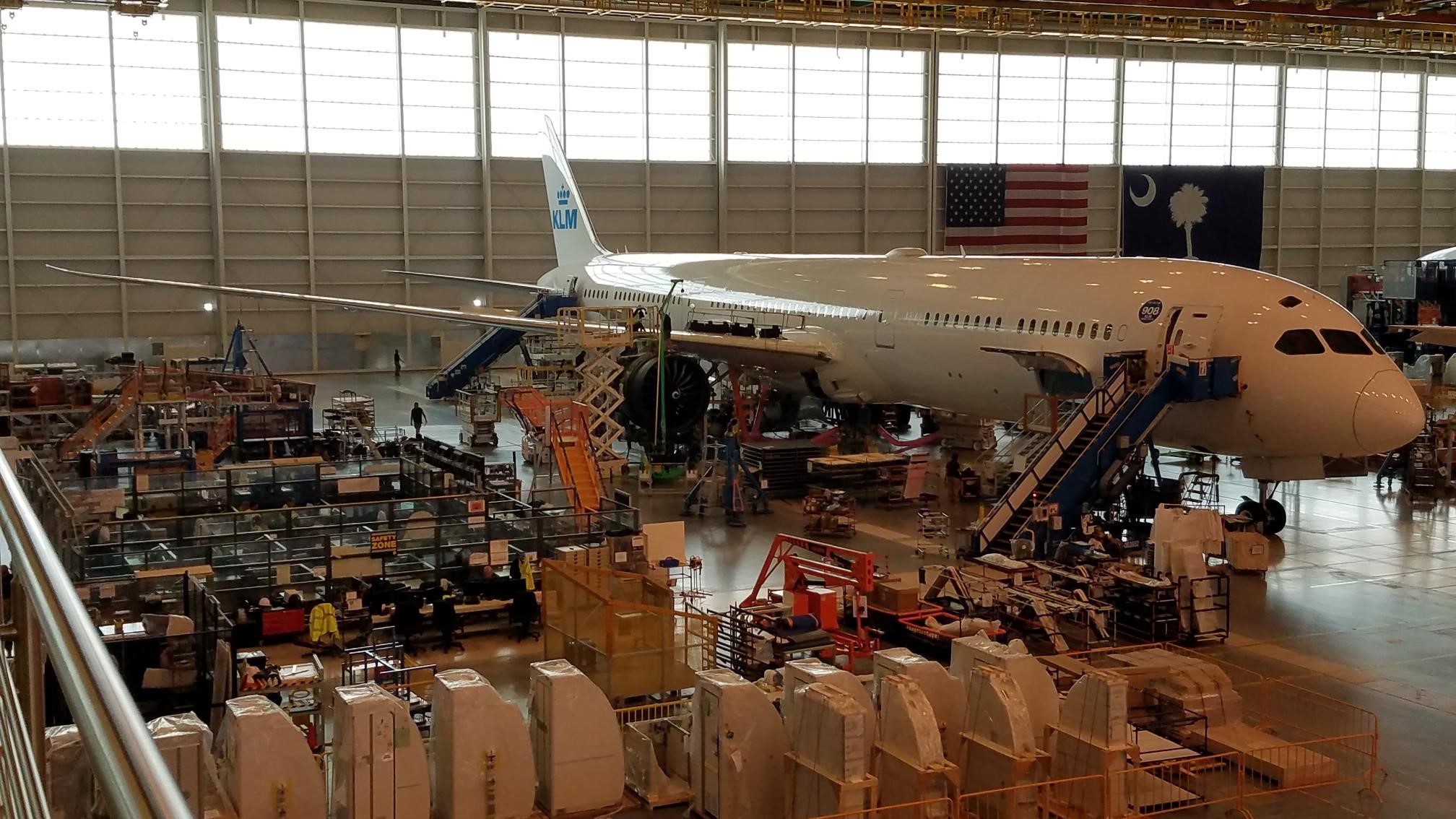 These positions are currently in the process of being combined. Seats are installed, cabin ceilings are closed, and cargo holds are partitioned off. The B787-10 has new seats in both Business and Economy Class, which not only ensure greater comfort, but also save space and reduce weight. The most expensive parts of the entire aircraft – the engines – are installed at the very end of the process. Most of the system test work is done before the aircraft rolls out of the factory. 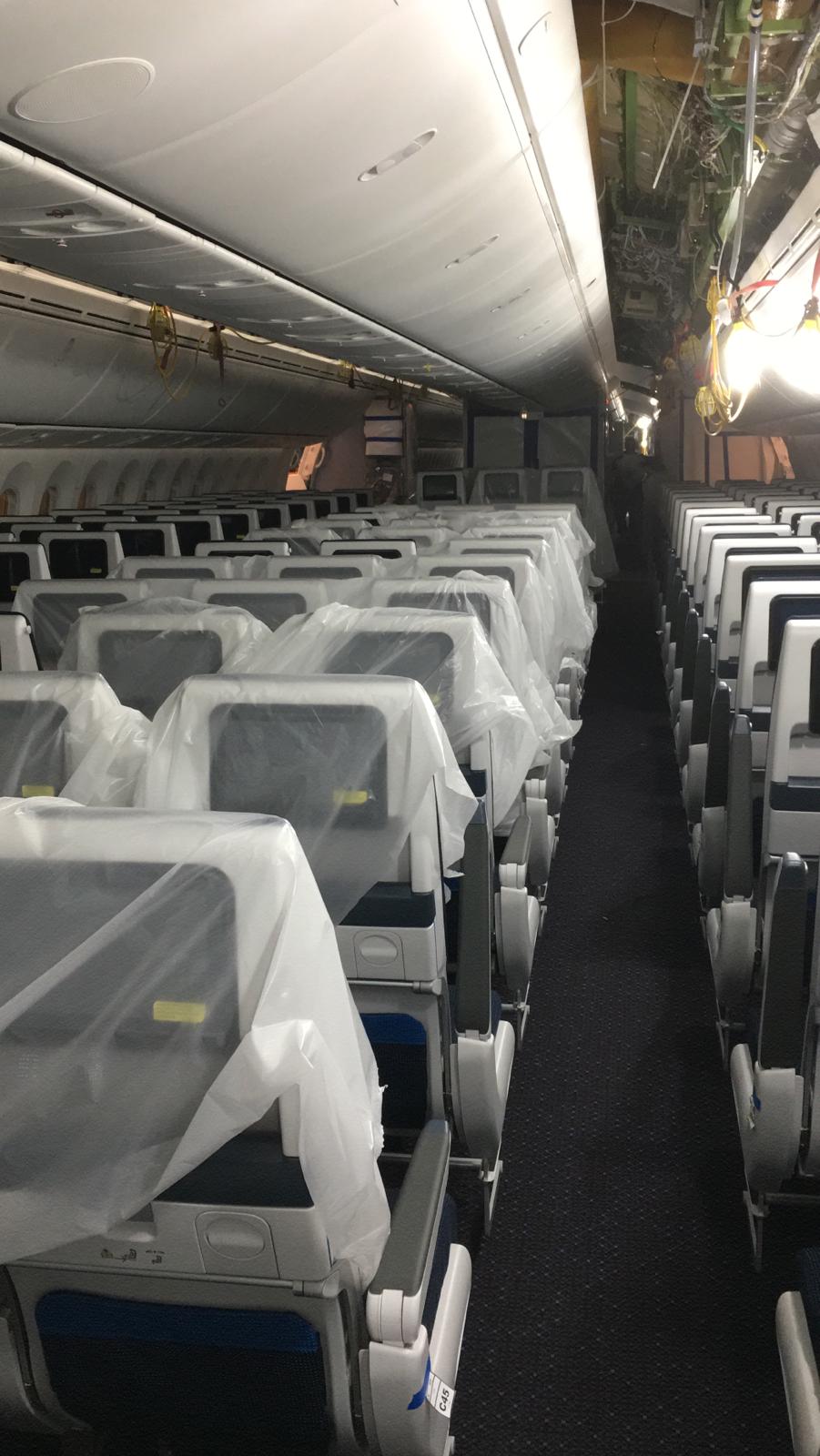 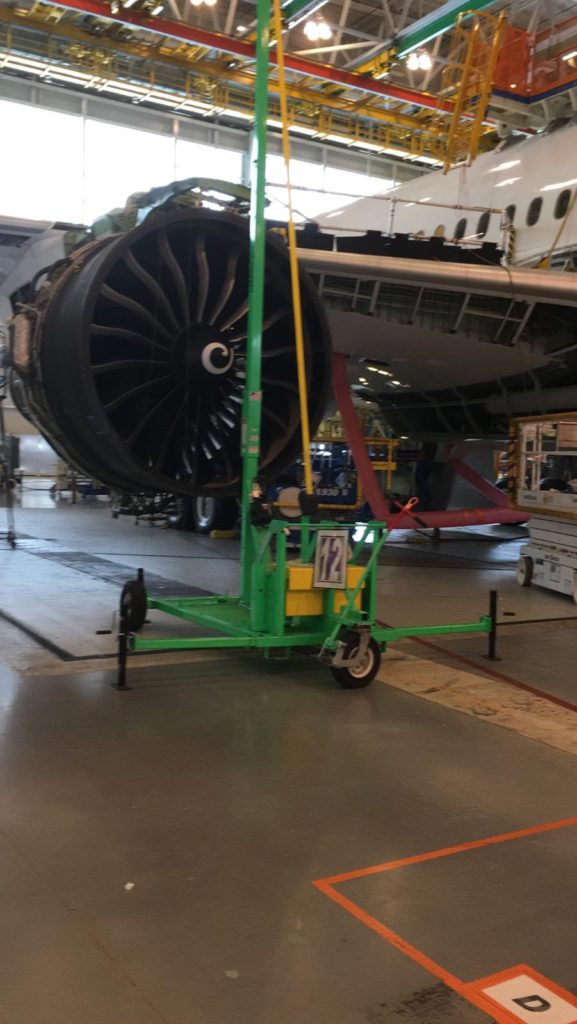 The aircraft is then prepared for its first flight by running another full systems test, after which the engines are tested and leak tests are run on the fuel and hydraulics systems. If everything checks out, the aircraft completes a so-called “B1 flight”, where B stand for “Boeing”, which is apt because only Boeing pilots are on board. If necessary, a B2, B3 and B4 flight may be operated (or more if need be), but usually a B1 suffices.

Once the B flight program is successfully completed, the aircraft is prepared for customer-related activities, such as the Customer Walk and Customer 1 (C1) flight. The Walk gives customers like KLM a chance to check that everything has been built in accordance with their wishes and specifications. Once this has been completed, there is a formal Transfer of Title, making KLM the official owner of this magnificent piece of technology.

Come fly with me

After the Orange Blossom, the Busy Lizzie was our second delivery at Charleston, SC, whereas our 787-9’s were all from Everett, WA. Basically, we swapped the Northwest for the Southeast, mountains for swamps, bears for alligators, and cool crisp days for damp and muggy conditions. Hmmm… All this may not sound very appealing, but the work and people are still great fun and very interesting. We’re currently on track for two more 787-10s to be delivered this year, and another four scheduled for delivery in 2020. Meanwhile, “Orange Blossom” and “Busy Lizzie” are at your service, carrying passengers between Amsterdam and Delhi, Dubai, Dar-es-Salam and Kilimanjaro. 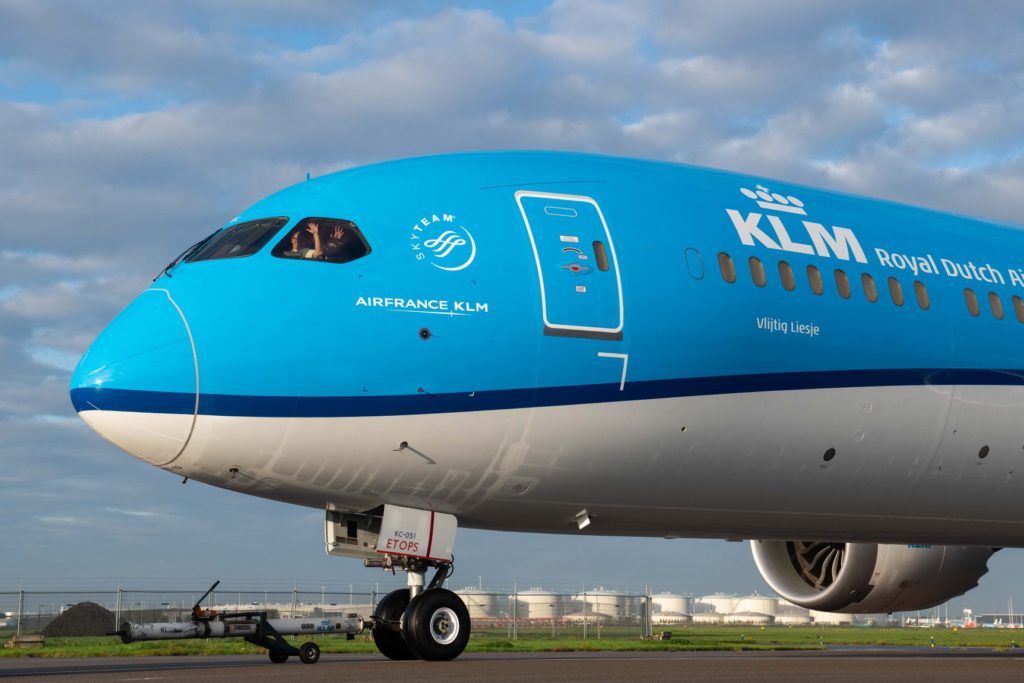