Last week, I wrote a blog about Mexico, lampooning some of the stereotypical ideas people have about Mexicans. Unfortunately, some readers did not read the whole blog and subsequent comments from readers which helped set the record straight and revealed some interesting facts about Mexican history and culture.

This week I intend to tread more lightly by giving you a whole lot of information about a place (in the form of twenty clues), without actually mentioning the name of the place. I’d be very interested to hear how many clues you needed to guess the right name. And if you have any other interesting information about the place, feel free to share it with us below.
The first four clues are answers I got from friends when I asked them what they knew about this place.
1) “Spandex” (seriously)
2) “A secret surf spot somewhere in Mozambique”
3) “Pointer dogs”
4) “Latin America”
If you already know the answer at this point, you’re either very intelligent or one of the cheats who call themselves my friends on Facebook and Twitter.
The clues below run from general to more specific. The place I’m referring to is located within a country, so the first clues below refer to the country and the latter clues refer to the place itself. (Are you still with me?)
5) This place is located in the country where Christopher Columbus was buried in 1506.
6) Spanish is the most widely spoken language in this country.
7) Two of the country’s favourite pastimes are merengue and baseball.
8) This place is located in the country that boasts the first university, cathedral and castle in the Americas.
9) This place is located in the country that boasts the highest peak and the largest lake in the Caribbean.
10) This place is part of a country that has been ruled by Spain, France and the United States.
11) This place is part of the second-largest Caribbean nation, after Cuba.
12) This place is part of the country whose closest neighbour is Haiti.
13) This place is located in the easternmost province of the island Hispaniola.
14) This place has beaches on both the Caribbean and Atlantic.
15) Here’s a photo to help you along. According to legend, this rectangular pool was created when Captain Kidd, Scourge of the Seven Seas, dropped a large treasure chest upon this very beach. 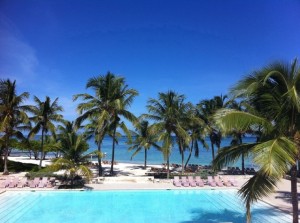 16) This place boasts the world’s first privately owned international airport.
17) The place has no fewer than 12 golf courses.
18) The nearest city is the 500-year-old provincial capital of Higüey.
19) KLM will begin operating flights to this place on 31 October (taking over from Martinair).
20) I will be sitting under the little palm tree in the middle of the above photo on 1 November, or soon thereafter.
Let me know what your guess is and feel free to share any other interesting facts about this place with us.