I’ve been to Barcelona. But it took me quite a while to get there. Twenty-two years, to be exact. The main obstacle proved to be the Pyrenees. And the friends I kept, or course. Friends who enjoyed the great outdoors more than city trips. Friends who preferred different modes of transport – public or private – which meant we hardly ever travelled together. And so we would choose a village, mostly on the sunny, Spanish side of the mountain, where we would always meet “at the bar nearest the church on the central square.” We never needed a map to pick a suitable rendezvous point. But all that changed as soon as our hike began. It is a miracle our friendship survived some of our navigational discussions, considering the arrows of sarcasm fired by the minority at the majority who had voted for what later proved to be the wrong route.

The photo below clearly shows the group dynamics. The guys with big hair and headgear taking charge of the situation, while the guys with floppy hair, including the photographer, have their minds on other things. This was clearly also the year of our Shortest Shorts in All of Spain Contest, which has remained undecided for over two decades. I therefore cordially invite readers to select the winner by ranking contestants A through E. (I am contestant B, by the way, who wisely chose to compensate for his lack of pants by donning a jaunty hat and, yes, cobalt-blue socks.) 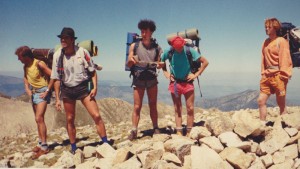 As I was writing the above, I suddenly realised this wasn’t the first photo of me on Spanish soil. I’d been there as a child, more than forty years ago, with my parents. “We always went to Alicante,” says my mother. “You hated the beach, the sand. You always sat on a towel.” Fortunately, I have the photos to prove her wrong. In fact, the photo below clearly shows that I enjoyed close communion with the sand, and that I developed my excellent taste in headgear at an early age. 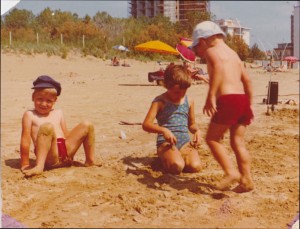 Many years later, I also drove through the Spanish provinces of Extremadura and Andalusia in the West and South. I wanted to see Castilblanco for myself. This village was the setting for a screenplay I once wrote – unfilmed, of course – which tells the story of an artist who returns to his father’s place of birth to scatter his ashes. On arrival, he discovers that his family name still strikes fear into the hearts of the people of Castilblanco, long after the Spanish Civil War.

The screenplay is called “Extremadura” and it’s still for sale. Feel free to contact me. Or, if you’re feeling less generous, why not vote in the Shortest Shorts in All of Spain Contest? And while you’re at it, you might as well pick your favourites in the Lovely Legs Contest.

Maybe I’ll get to Barcelona next week. Or Madrid.