At our Social Media department, we book thousands of flights and let you know if you’re allowed to take a huge toy giraffe on board. We, social media agents, know a lot (a whole lot!), but we actually also learn quite a lot from the many curious passengers who ask us questions via Facebook, Twitter and LinkedIn! Today I found an answer to the question, “What’s that comma doing in that engine?”

A passenger wondered on Twitter what that curling, comma-shaped symbol was doing in the engine. It’s actually called the spiral on the fan spinner cone. But what exactly does it do, besides looking rather cute? The spiral has a fairly straightforward function, alerting ground staff to a running engine and ensuring that no one comes too close to it. If an engine is running, you see a white blur or a hypnotising twirl, depending on the rotation speed of the engine. This visual cue is extremely clear and warns everyone on the apron to stay away from the huge jet engines.

“Can’t ground staff hear the deafening roar of a running jet engine?” I hear you wonder. Well, there could be several engines running at once near ground crew, plus they wear hearing protection. If five engines are singing in your ears, it isn’t always obvious which is running and which isn’t. 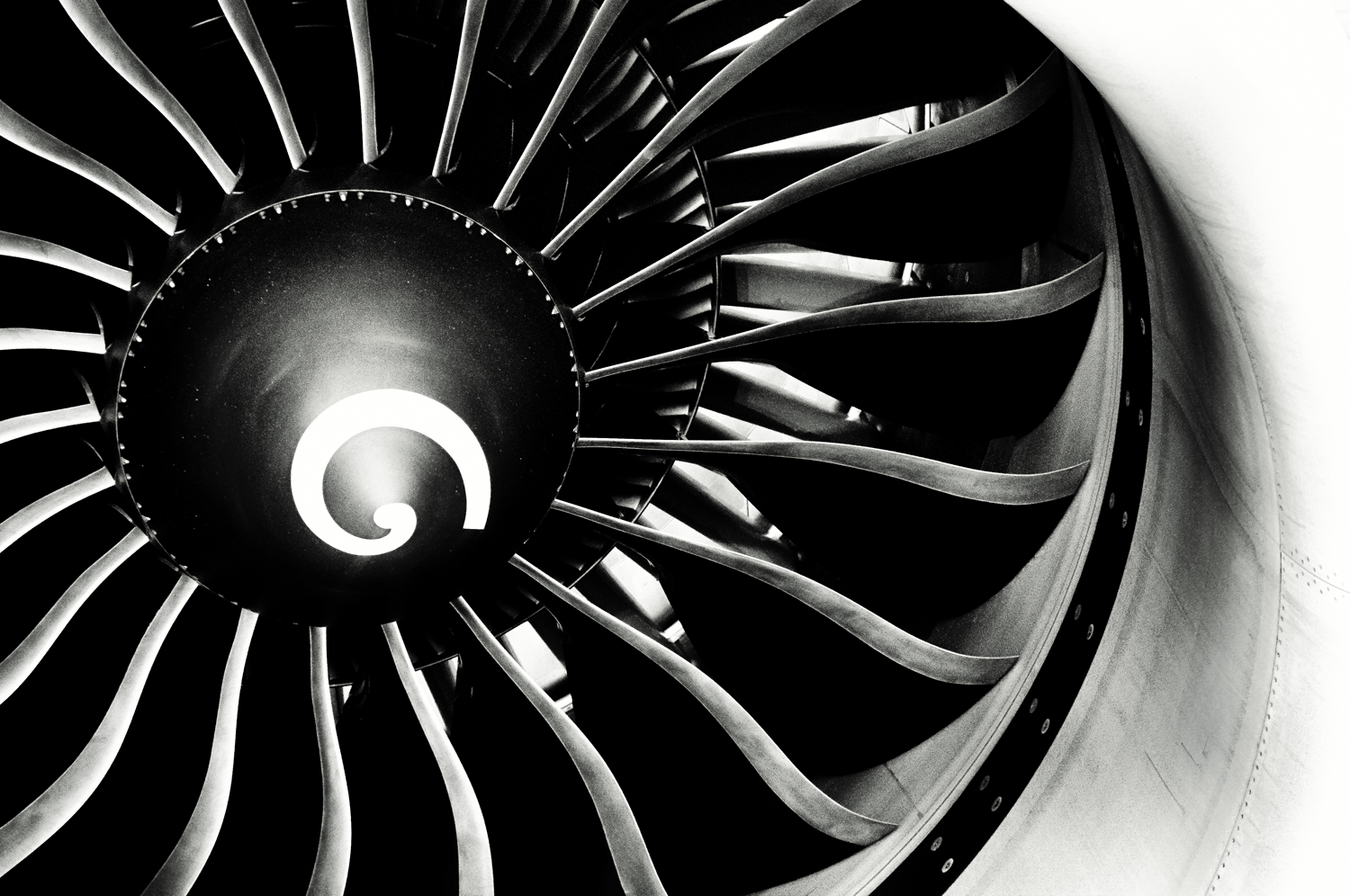 There’s also a hazard area around every engine. For example, an idle engine of a Boeing 787 Dreamliner has a hazard area of 15 ft/4.57 metres. This radius is measured from the centre of the engine inlet. You can just imagine the immense power of such an engine and what it could do to anything that got too close to the fans. So that’s why the visual cue of a moving spiral is such an important safety measure. It enables us to see that an engine is running and to stay well clear of the engine inlet. Next time you’re at an airport, you might like to grab your binoculars to see if you can spot moving spirals in our blue birds’ engines!

Spirals have been around for about five or six decades now. In older planes, the big fan blades in the front of the engines can spin the other way when it’s very windy. And in some engine types, the fan needs to spin before fuel is added to start the engine. You can imagine the spiral is quite useful in these engine types as well.

The ground crew or the maintenance technicians can easily see from the direction of the spiral whether the fan rotor is rotating in the correct direction and communicate this to the flight crew, so they can continue their start procedure. Of course, this procedure is no longer necessary with newer engines, because an auto-start engine does this on its own. By the way, the spiral on the spinner cone can only be seen if you’re in front of a plane, so most propeller aircraft also have markings on the propeller blades. When they rotate at high speed, the markings create lines in the air. Handy, if you want to avoid losing your head!

We are talking about a spiral here, but in fact, the spinner markings come in a variety of shapes and sizes. Latest generation engines are delivered with a spiral applied by the engine manufacturer, there is a slightly different design in spirals between for example General-Electric engines and Rolls Royce engines, although the purpose is still the same.

What about the birds?

It’s not a scientifically proven fact, but the spiral may also encourage birds to fly clear of the engine during taxiing, take-off and landing. Instead of a black hole, they see the spinning spiral as a white disk, which might warn them to get away from the black hole that would lead to their untimely demise.

Several studies have been done, but none have been conclusive. Boeing and Rolls Royce, for example, say the spiral does not prevent birds from flying into the engine, as the rotation would be too fast for the birds to see the spiral. Other studies have suggested painting spiral shapes on the spinner cones do help prevent bird strikes. I guess the answer to this question can only be “maybe”, at this point. If only we could ask a bird:)

It’s quite possible you’ve heard or read this before. We’ve posted this blog in January 2016. So this actually is a repost. But let’s be honest: you can never know too much about jet engines, right? ;-)