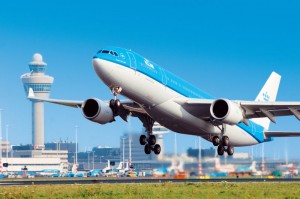 The A330 is a unique plane; it has a beautiful design and uses less kerosene than other types of aircraft. The A330 can be refuelled to the nearest kilo. During refuelling, the plane obviously gets heavier but unlike other planes that gradually sink as more fuel is taken on, the A330 sinks only in increments of 5 cm at a time.

The A330-200 has many automated systems and safety features. Almost all aircraft instruments are integrated into six screens (two for primary flight data, two for navigation, one for the systems and one for the engines and warnings) that give a clear view so that the flight crew can see the status of the aircraft at a glance. The aircraft has a digital ‘Fly by Wire’ system. This means that it is not controlled by mechanical cables but through electronic signals. In fact, the aircraft is controlled by a side stick, similar to the joystick used with game computers.

The A330 has a characteristic nose-down attitude on the ground. 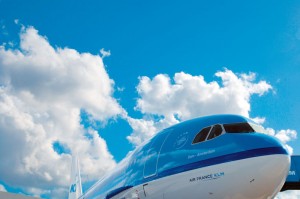 Some facts and figures:

* The twin-engine wide-body aircraft is made by the European manufacturer Airbus.
* Depending on the type of aircraft and the seating plan, the A330 can carry 255 to 380 passengers; due to the Economy Comfort chairs with a 35 inch pitch, KLM’s A330-200s seat a maximum of 243 passengers.
* The slimmer wings have separate kerosene tanks, which improves the aerodynamics on take-off. After take-off, the aircraft distributes the fuel over several tanks. On a flight from Amsterdam to Atlanta, the aircraft consumes an average of 49,000 kilos of fuel. The maximum take-off weight is 233,000 kilos.
* The wing span is 60.3 metres and the wing surface is 361.2 square metres.
* The length of the aircraft is 58.37 metres and the vertical tail tip is 17.73 metres above ground.
* Average takes off speed is 315 kilometres per hour, climbing at an initial rate of 600 metres per minute. The surface ceiling of the A330 is 12,500 meters and the aircraft lands at an average of 260 kilometres per hour. The A330 cruises at 880 kilometres per hour and its maximum range is 8,800 kilometres. Depending on temperature, wind and air-pressure, the fully laden aircraft needs only 2,650 metres of runway. This short landing distance means that the aircraft can land at many airports. 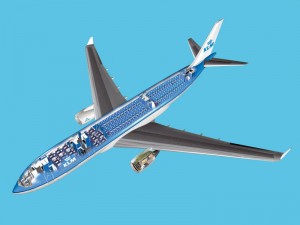 All of KLM’s A330-200s bear the names of famous squares around the world. Some time ago, we requested our followers on the KLM Bright Ideas page to come up with a name for the second A330-300 to arrive next year. With 142 votes, Piazza Navona (Roma) was chosen.