Whenever I feel cocky and think I’m starting to get a grip on the world, I remind myself of China and realise how ignorant I really am. Until about a week ago, I knew the names of three Chinese cities: Beijing, Shanghai and Hong Kong. I’d read about other cities in articles, but somehow their names never stuck in my mind-glue. I’m not sure why. Maybe it’s because I’m getting older. Or possibly because China still seems so far away, having been hidden from view for most of my life.

All of these thoughts crossed my mind as I clicked through photos of the city of Guangzhou and read up on its history, which stretches back many dynasties to a time when Amsterdam was little more than a clump of seaweed clinging to the shifting mud of an unnamed delta.

Perhaps that is the problem: one is inclined to see one’s own city or country or continent as the centre of the world. In Holland, we tend to get really excited when we find traces of Roman habitation hidden underground. We treasure such evidence of ancient civilisation – a coin, an arrowhead or a shard of pottery. But a quick comparison of Roman and Chinese history reveals some astounding facts.

The Roman Empire traces its origins back to the legend of Romulus and Remus, mythical twins raised by a she-wolf, who are said to have founded the city of Rome around 753 BC. That’s a long time ago – 2,764 years, in fact – but it seems like yesterday compared to Chinese history, which boasts written records tracing its origins back to the Shang Dynasty which ruled the land from 1700–1046 BC. That’s 3,711 years ago! And there is even evidence of a Xia Dynasty before the Shang.

I could, of course, go on regurgitating intriguing facts about Guangzhou. I could tell you it is the third-largest city in China, after Beijing and Shanghai; or that it is the capital of Guangdong province; or that there are around 24.2 million people living in the greater Guangzhou area, making it the second-largest urban cluster in the world, after Tokyo. But you can read all that on Wikipedia.

Instead, I’d like to share with you some of the photos that opened my eyes. What I found most intriguing is just how closely Guangzhou seems to resemble cities on so many other continents. Especially when viewed from afar. Another thing I noticed was that there were many photos of Guangzhou by night. Not just snapshots from the safety of hotel balconies or rooftops, but street scenes captured by travellers who clearly felt comfortable venturing out into the city after dark. 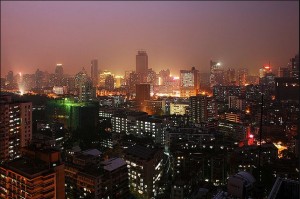 This could be any shimmering metropolis by night, but photographer Jesse Warren assures me it is Guangzhou. He can’t remember where he was standing when he took it. Guangzhou Tower perhaps? 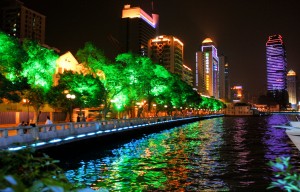 Photographer MicMac captured Guangzhou’s vibrant reflection in the waters of the Pearl River. I’m not sure if the colours have been enhanced, but those are definitely the greenest trees I’ve ever seen. 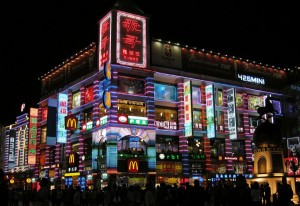 I browsed through screen upon screen of kaleidoscopic street corners, but this photo by Xiquinho Silva really took the cake, the bakery and the burger joint next door, turning them into a space ship preparing for take-off. 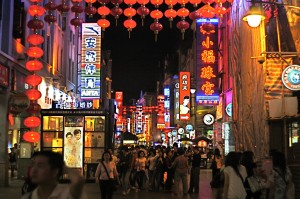 This gateway of lanterns featured in many photos, but Matt Choy managed to capture Beijing Lu Bu Xin Jie in all its garish, bustling glory, as if the shoppers are powering the lights by moving. 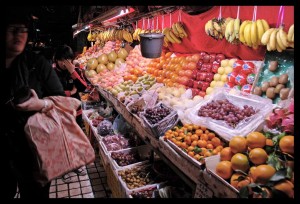 This fabulous photo by Anne Liew, taken near Zhongshan Er Road, looks good enough to eat. Notice the lady in the background making the universal damn-I-left-my-purse-at-home sign. Or perhaps the lady in foreground, clutching a purse … No, surely not. 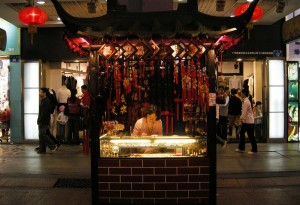 Another colourful photo by Xiquinho Silva of the shopping street Beijing Lu Bu Xin Jie. I’d really like to know what this lady is making or reading or selling in her tranquil cocoon. 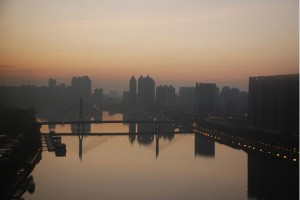 Guangzhou at dawn. The city dark and placid, the Pearl River like new ice just begging to be carved up by boats. You can almost imagine that photographer Alvin Chung was the only person awake at this hour. As if it was his turn to switch on the lights.

Thanks to photographers Jesse Warren, MicMac, Xiquinho Silva, Matt Choy, Anne Liew and Alvin Chung for allowing us to use their wonderful photos. Click on the links to see more of their work. And please feel free to share your own Guangzhou anecdotes and photos below.